A wee structure sits atop my work desk, crafted out of clay. It’s two structures, actually: a lozenge-like disc depicting Planet Earth, and a nice, cushy blue couch with an overstuffed pillow. The outcome of a craft session with my daughters when they were young, Planet Earth lounges peaceably on the couch, taking a break from the hard work of being, well, a planet.

I keep Planet Earth on my desk for several reasons.

First off, she reminds me to spend each day doing my best.  Life is short, we only get so many runs around the sun, yet the needs of our planet and our peoples are tremendous. Seeing her provokes me to prioritize the high-leverage, impactful things on my daily list of To Dos.  To help me choose between tasks, I have long-relied on the Eisenhower Matrix, which Steven Covey popularized in his seminal time management book, First Things First. The matrix helps to organize tasks by urgency and importance. I’ve used it throughout my career to help me focus on important activities before they become urgent.

Seeing Planet Earth tucked into that cushy couch also reminds me to pace myself. To know that the work of community building is a long-haul game. Sure, there are times for sprints and times to sit on the bench, but in general, it’s a day-in, day-out slog and no one’s the better if I work myself sick or forget to look back and appreciate the little bits of progress along the way.

She reminds me that the work of community building is the work of relationship building. Progress moves at the speed of trust, it is often observed. Make the time to slow down and have a cup of coffee with a coworker, swing by the office of a new partner organization and see the work from their daily perspective.  In other words, hang out – on a couch or elsewhere – for a bit. See where time and attention can take a relationship.

As French philosopher Simone Weil observed, “Attention is the rarest and purest form of generosity.”

Poet Mary Oliver once wrote, “Let the soft animal of your body love what it loves.”

In a world of 24-7 news cycles and relentless geopolitical and domestic chaos, it’s good to take some pointers from Planet Earth: after all, she’s pretty much seen it all. 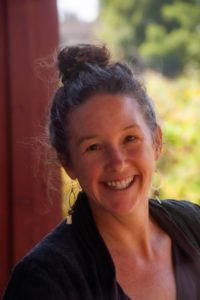